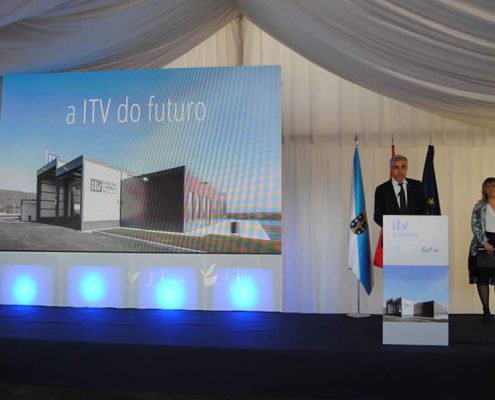 The industrial park of A Sionlla, located in Santiago de Compostela, welcomed today the opening ceremony of the new PTI station, which is the 25th inspection facility of the company concessionaire in Galicia, and is the first of a new generation of stations of the future, thanks to the modular system design and construction, which is the result of the R&D initiative of Fomento de Iniciativas Group, of which Supervisión y Control is a member.

This PTI station was born as a complement to those existing area of Santiago, Tambre and Cacheiras, to improve coverage of the inspection service, with an initial forecast of covering about 25,000 inspections per year in all kinds of vehicles. It has a staff of six inspectors, two administrative officers and a station director. In addition, for the first time in SyC-ITV and as a sign of consolidation of the project Son Capaces, this station will have an administrative from the first day. The opening hours of the station, which will be open to the public from  Saturday 22, will be Monday to Friday from 8:00 to 21:00, and Saturdays from 8:00 to 14:30.

As for the modular technology, it was developed by SyC-ITV in collaboration with the Higher Technical School of Architecture of A Coruña. This system allows not only change the structure of the facility to meet future needs, but also enables significant savings in cost and time of execution. Regarding equipment, the station features the latest machinery to perform allowing more thorough inspection on all types of vehicles, including the most innovative ones.

The aim of Fomento de Iniciativas, a multinational business Group 100% Galician, which represents more than 1,200 workers and companies in the nautical, construction, real estate, environment and vehicle inspection companies, is to make the station a technological benchmark in field of PTI, and a testbed for the future.

The authorities attending the event emphasized these values in their speech and showed their willingness to permanent demand and innovation shown by Supervisión y Control with this initiative. This way, the company does not only contributes to support the growth of Galicia through the creation of wealth and employment , but also to the integration of people with disabilities, to promote the responsible use of vehicles, safety and environmental control.

Traffic authorities will use cameras with number plate readers to detect vehicles...

SYC Applus+ uses its own and third party cookies for analytical purposes (for example, pages visited), for protect yout security or load multimedia content. Click HERE for more info. You can accept all cookies by clicking the 'ACCEPT' button or set or reject their use by clicking the 'SETTINGS' button.

Analytical cookies allow us to know how you interact with the website, the number of visits in the different sections and to establish statistics to improve our practices.

If you do not want that we track your visist to our site you can disable tracking in your browser here:

In view of the recent limitations on mobility, SYC Applus+ informs you that carrying out the PTI is a justified cause for authorised travel.

In the case of legal persons: name and surname, telephone and contact information of the employee, representative or contact person in the company.

Companies of the Applus Group and other service providers.

Your personal data may be transferred to, stored, and processed in countries that do not provide an adequate level of protection for personal data in accordance with European Union legislation. We have implemented appropriate guarantees (in particular, contractual commitments) in order to ensure the adequate protection of your data.

The exercise of these rights may be made effective by writing an email, including a copy of your national Id card or identity document to privacidad@sycitv.com

Available at the following URL.

We recommend you to read this information carefully.

You have the right to object to the processing of your personal data, at any time, when this is based on the legitimate interest, including purposes such as sending reminders of next inspection date and due date of inspection by sending an email to privacidad@sycitv.com, including the reference “Data Protection” and accompanied by a photocopy of your ID card or an equivalent identity document.